This post is about the best logic puzzle I’ve seen in absolutely ages. It’s easy to explain and doesn’t require any silly tricks, but has a decent amount of depth to it and challenges your intuition. I’m going to present the puzzle, an extended version of the puzzle, and a general solution to the extended version.

The “classic” puzzle was told to me by David Cushing, who was told it by Alistair Bird, who himself found it on the MathOverflow “math puzzles for dinner” thread.

And the puzzle is:

Is there a strategy the prince can follow to guarantee he looks in the room the princess is sleeping in within a finite number of days?

If you haven’t seen this puzzle before, look away from the screen now and spend some time working out the solution. Try starting with castles of just a few rooms, and see if you can spot a pattern in the winning strategies. This version of the puzzle is definitely solvable by just sitting and thinking for a while.

If you have seen this puzzle before, or if you’ve given up (don’t give up! Have another go, then come back here. Finding the correct solution is much more satisfying when you’ve tried lots of other ways), here are the winning strategies for several different numbers of rooms, for reference. I’ve put links to the relevant layout in the interactive puzzle at the bottom of each solution.

These aren’t the only solutions to the puzzle. Are they the shortest? Why?

Andrew Lobb came up with a very good explanation of why this works:

Princess on a graph

So that’s the classic puzzle solved. David thought he would like more to do, so he asked: what if the rooms are laid out in any arrangement, not necessarily a line?

That is, if the layout is an arbitrary graph, can you still find a winning strategy? What does it look like?

That’s a very good question! The general solution we had for straight lines doesn’t work because it needs a path straight through all the vertices, which you can’t make in general.

The first thing we did was to play with some simple examples to get an idea for how the puzzle works. First, we tried a binary tree with three levels. That’s solvable: one solution is \((2,1,3,3,1,2).\)

What about a triangle? It isn’t solvable – no matter what you do, the princess always has two rooms to choose from. 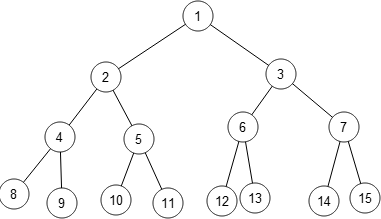 David came up with a couple of conjectures:

Only one of those is true!

This was as far as we got before I brought the puzzle up at MathsJam in November. 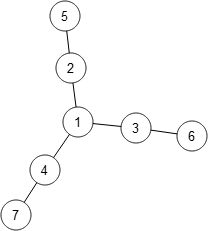 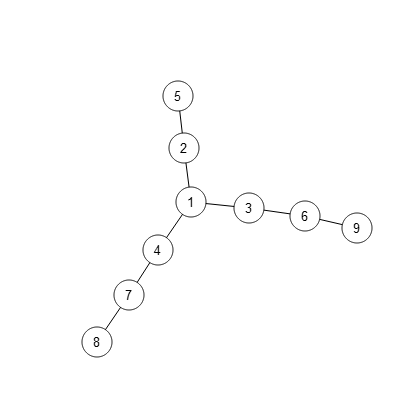 So Matthew asked, can we find a property of graphs which tells us whether there is or is not a solution? This was the insight that set us on the way to a solution.

I’ll stop the rambling narrative now and deal out some straightforward maths. I’ll define my terms, give an algorithm which finds the shortest winning strategy for a graph, if one exists, then I’ll tell you which graphs are solvable.

Let \(G\) be the (finite) graph corresponding to the layout of the castle. Give every vertex a unique label.

Here is how the puzzle works in this language:

This is just a representation of the rules of the game; it does not give us a way of finding winning strategies.

An algorithm to find the shortest winning strategy (if one exists)

Make a couple of observations:

But when are two states the same? If every vertex has the same \(Y/N\) labelling, certainly the states are the same, but that’s not the only case. When we were just looking at simple lines of rooms, we could start our strategy at either end, so a state which is the same as another after a reflection is really the same state.

This extends to all symmetries of the graph. For example, this state

is really the same as this one

and these states are all equivalent: 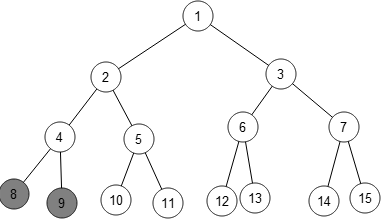 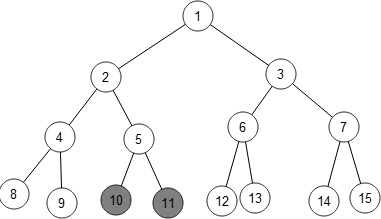 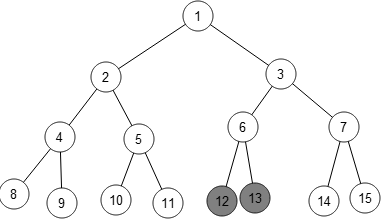 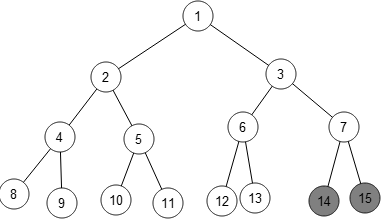 So here’s a recursive procedure for finding the shortest winning strategy for a graph:

The stuff about symmetries is just an optimisation – the above algorithm will always produce the shortest strategy even without the symmetry check, but it’s a good optimisation.

This procedure will return null iff the graph is unsolvable. But it doesn’t tell us much about which graphs are solvable.

So which graphs are solvable?

But which trees are solvable? David conjectured that they all are. Well, the algorithm I gave above shows that the graph with three spokes of length three joined to a central vertex (aka “threesy”) is unsolvable. Because it would take ages to describe every step, here’s a handwavey video:

So only graphs not containing “threesy” can be solvable. 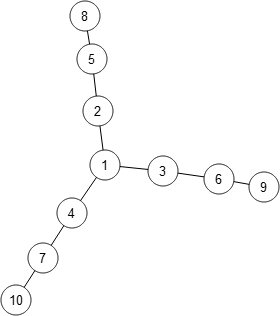 Every such \(T\) is solvable, because here’s a winning strategy:

Once you have finished the process for \(v_{n-1}\), repeat the sequence of moves you’ve done so far, but reversed.

The reason this strategy works is the same as the reason Andrew’s strategy for straight-line castles works: on the forwards half of the strategy you are ensuring that the princess is either ahead of you or in rooms of the opposite parity to you. Once you’ve reached the end, repeating the strategy backwards puts you on the same parity as the princess, so you’re bound to find her.

So the set of solvable graphs is exactly the set of trees not containing threesy. How satisfying!

I expect to edit this post as people ask for bits to be clarified, but I really wanted to share what we’ve found, even if informally. This has been a very satisfying investigation!

Any chance of tagging this Mathoverflow or PlanetMO so that it can be found through http://www.mathblogging.org/planetmo ?

And thanks to that page, I see you’ve already found someone else talking about the original version of the problem.

I tried to solve a binary tree with 5 layers.

My tree has the same 15 vertices as yours but vertex number 1 connects upwards to a new vertex (called 0) above it. (It is easier to visualise if you draw a picture, but I’m not up to doing that on the computer)

However, I think that, if the princess comes from somewhere in the ‘new’ part of the tree via vertex 0 after I have crossed vertex 1 for the first time in my sequence she is able to remain undetected.

In fact there are several opportunities to enter and remain undetectable. She can enter vertex 1 when I am in any of the starred rooms:

It helped me to think of 5 rows of the tree as having alternating colours (black and white) and to think that when the princess I were both in the same colour room we had the same ‘parity’. To defeat me the princess needs to have the opposite parity to me after I have completed my double stay at vertex 7.

Do you agree that a 5 row binary tree is unsolvable?

The full 5-row binary tree is unsolvable, but the one you gave with just an extra vertex attached to the top is solvable.

In fact, the solution I gave for the full 4-row tree works for your one, too. Have you tried the interactive puzzle I made?

The strategy you gave for the princess is not as long as the strategy I gave to find her. She needs to evade capture for the whole time!

You’re on the right track with the parity argument though – that was Andrew Lobb’s explanation of the original puzzle.

In your strategy for the princess, she does start on the opposite parity to you. So after your double stay at vertex 7, the Princess’s room has the same parity as yours.

By the way, the reason the full 5-row binary tree is unsolvable is because it contains a copy of the graph ‘threesy’. All the Princess needs to do to avoid capture is to stay inside ‘threesy’.

Looks like some comments got lost when I moved this site to a new server. Someone asked for more detail on proving that ‘threesy’ is unsolvable, so I recorded this video explaining how the algorithm goes: http://www.youtube.com/watch?v=4fudkLW9pC4

To eliminate some of the luck involved in the original game, I have reformulated it a bit (for kids in my enrichment class, see vampire-hunt.pdf): The prince actually announces the room he will enter before the princess makes her choice. That way, it is more challenging to play, because the princess will never be found by accident.

That’s a very good idea. I like the “game forms” you’ve made! I think I’ll print some out and try it out on the new students at work when they start.